Indian carriers have large number of aircraft on order and fleet is growing rapidly but the widebody fleet has been stagnant for a long time. It is only recently that Jet Airways started utilizing all its wide body aircraft – which have spent majority of the time with other carriers on lease.

On this backdrop, it was disheartening to read that Air India has been utilizing only 21 of its 27 B787 Dreamliners for its daily operations. (Economic Times, Business-Standard) I am not one of those who would start jumping about my taxes being wasted the moment somebody utters Air India, but 6 planes un-utilized was worrying.

I spent some time analysing the schedule and breaking it into rotations. A one click function for airline software, took about 4 hours for me to fit in multiple flights in multiple rotations on different days of the week. When it was done, the optimization looked solid. 406 weekly flights covering 29 destinations with just 21 operational aircraft on any given day, but requiring 22 to operate due to the turnarounds. This also gives in some space for maintenance, weekly checks and daily inspections.

Snippets of the work I did with the schedule. 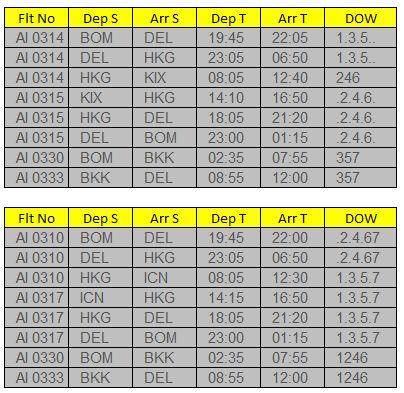 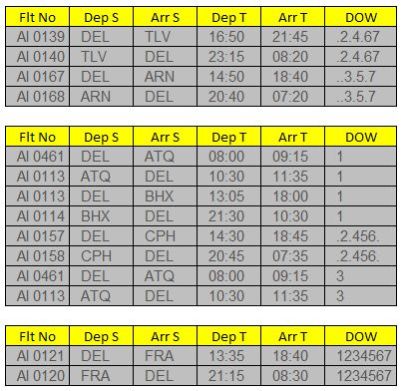 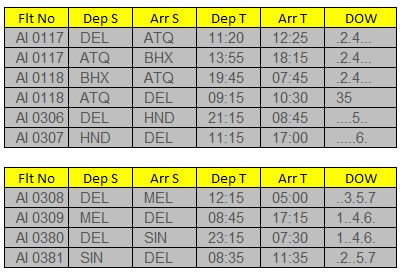 In January 2006, Air India placed an order for 27 B787-8 Dreamliners. First aircraft was delivered in September 2012 and the last of the order was delivered in October 2017. The aircraft is configured with 18 Business class seats (2-2-2 layout) and 236 economy class seats (3-3-3 layout) and seats a total of 254 passengers. The initial aircraft aided the phasing out of Airbus A310 and led to shifting of the airline’s hub from Mumbai to (then relatively uncongested) Delhi. Over a period, the airline with help from Delhi International Airport came up with an afternoon bank of flights to Europe with inbound and outbound feed from most of its domestic network which contributes to the traffic to Europe. 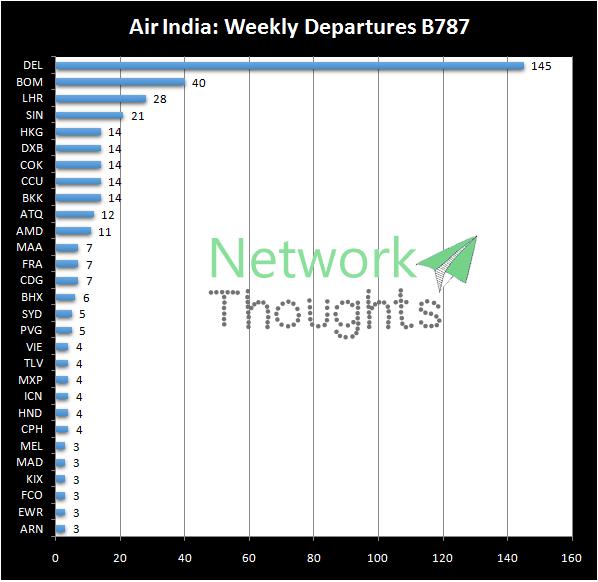 The airline requires 22 aircraft and that still leaves us with 5 B787s! How do we read this? The math is tricky. The airline has not updated its website for a while. It lists 21 B787s in its fleet, 12 of which are leased. The later ones are all believed to be leased which means that the airline has 27 in fleet of which 18 are leased. Exact leasing rates are not known and they differ from airframe to airframe. However, online resources indicate a monthly leasing rate in the range of $ 800,000 to $ 1,050,000 for the B787-8. Air India being a government owned entity and backed by government the default risk is lower for the lessors and typically the airline would get better rates going by industry norms.

While online articles suggest that the lease rates could be anywhere between $ 650,000 to $ 850,000 for an airline backed by the government having older airframes, I have considered $ 675,000 as average for this calculation. What does that translate into? The airline pays INR 4,86,00,000 (INR 4.86 Cr) per aircraft per month. 5 are not in use (Thought the airline says 3 are grounded), which makes it INR 24,30,00,000 which translates into INR 81,00,000 per day. The airline which is struggling and was put on block for sale recently is paying INR 81,00,000 per day to not fly few B787 Dreamliners! These are conservative estimates and anyone who has access to real rates can do the exact math.

However, I get concerned about un-utilized asset. The airline operates to 10 destinations in Europe; it pulled out of Moscow (link), flies from Ahmedabad to Newark via London, touches 7 destinations in East and South East Asia, and operates non-stop to Sydney and Melbourne! It is amply clear that there is market and the airline can and should get the aircraft back in shape to start new routes. Six of the destinations have less than four frequencies per week and markets mature in few years to add capacity.

It is amply clear that the airline has been going through some financial stress and the government is finding ways to continue funding the behemoth after the false start of the sale process and government abandoning the process, probably in view of the election next year. However, with growing air traffic out of India, Air India being a Star Alliance member attracting global traffic and the airline still not having covered some of the top routes from Delhi with daily flights, there sure is an opportunity to strengthen its network than keeping the aircraft on ground. The asset utilization increases starting October when the airline starts flights to Frankfurt from Mumbai and there are talks of starting flights to Nairobi from Mumbai and additional flight to London. The airline has also been long trying to secure a slot at Hong Kong for a direct Mumbai – Hong Kong flight. 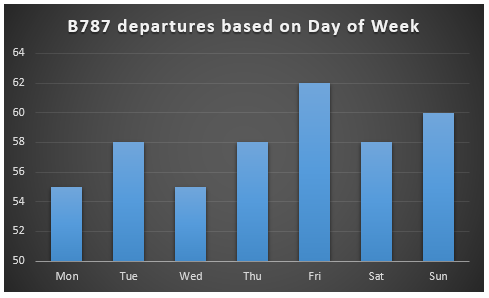 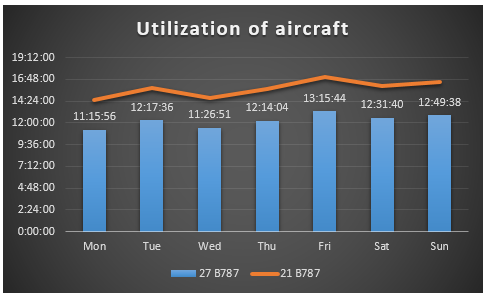 Utilization data shows that the 27 B787s are utilized at dismal 12hours and 15 minutes of average each day. Had the airline had just 21 aircraft in its fleet, the utilization would have been 15hours and 46 minutes. A few airlines have pushed turboprop utilization to 12+ hours worldwide and most carriers in India have their narrowbody utilization in excess of 12:15.

Is it time for the government to fund the maintenance of those B787s which remain grounded and get the whole fleet back up in the air along with using diplomatic channels to get the slots Air India needs to start these flights? As someone once quipped – now is the time for India and Air India and I sincerely hope his words are true! In the hay days of the Dreamliner, if the expansion cannot be right, it will be difficult to get it right later. This tale is just for the Dreamliners, one wonders what is the story with rest of the fleet. 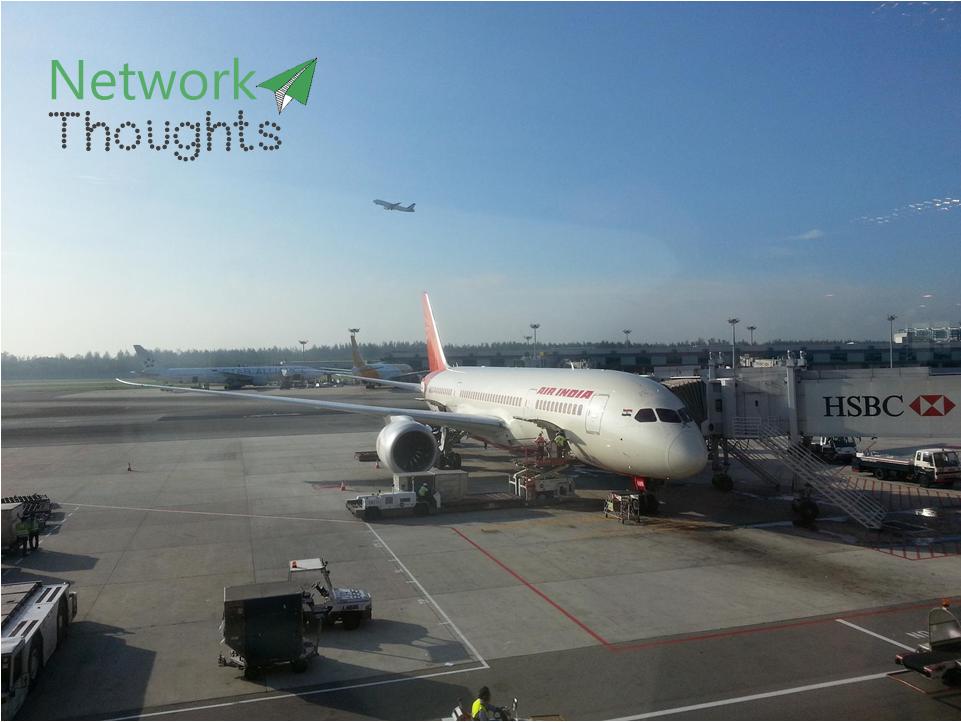 2 thoughts on “Is Air India paying INR 25 crore per month to keep aircraft on ground?”