The airline has an all-Boeing fleet comprising of the B737 series, B757 and B777. It has code share partnerships with Belavia – the Belarussian airline and S7 – the Russian airline. The closure affects the airline services to Birmingham, Frankfurt, Istanbul, Ankara, London and Paris. Ashgabat will not see any connectivity to the UK directly and its European connections will be via Turkish Airlines which flies to Istanbul and Lufthansa which flies to Frankfurt.

Data released by the Directorate General of Civil Aviation (DGCA) in India shows that the airline has carried a little over 3000 passengers per month from Amritsar to Ashgabat and similar number on the return while the numbers from Delhi stand at less than 2000 passengers per month. It is unclear on how many passengers out of these have been booked to any of the airlines destination in Europe. The airline also provides cheaper flights to Moscow, St. Petersburg and Kazan in Russia – all the places where there is sizable student population from India. 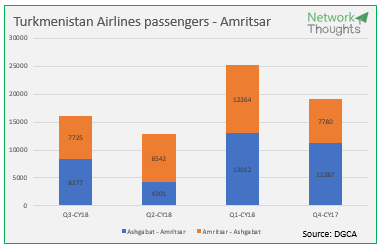 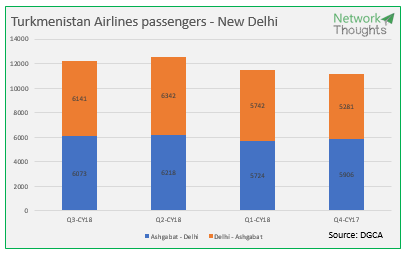 Air India offers non-stop flights from Amritsar to Birmingham also serves one stop via New Delhi to both Birmingham and London along with Frankfurt and Paris – the other destinations which were offered via Ashgabat. Uzbekistan Airways also serves Amritsar and offers connectivity to European Union via its hub at Tashkent. Till the ban is reversed, it is expected to benefit Air India.

Reports on Thursday morning (7th February) indicate that certain flights from UK have been re-instated and operated by Spanish charter airline Wamos air which is contracted by Turkmenistan airlines to avoid immediate disruption. Wamos Air has a fleet of A330 and B747 and the flights for Turkmenistan Airlines are being operated by A330, departing UK. It is unclear if the airline will have similar arrangement for flights from Paris and Frankfurt.

The speed at which older aircraft are being retired, I think I wont be able to experience the B767
Frankfurt has been my most favorite transit point in the EU but occasionally it has been Munich - mostly to fly on specific aircraft types. Like on this occassion when I wanted to fly the A350XWB within months of its induction !
Loading Comments...
Comment
×
%d bloggers like this: