One of the interesting airline which I have come across in Indonesia has been NAM Air. The airline which is part of the larger Sriwijaya Airline Group was founded in 2013 as a feeder to the parent and operates 11 B737-500 aircraft with an average age of over 22 years. The airline also operates two ATR72 aircraft.

The 737-500 with winglets are configured in 8 Business Class seats and 112 in economy. This would be my first time on the B735. Less than 400 air frames were built of this type, the least in the entire B737 family.

The booking was done on Traveloka along with the inbound Batik Air flight. It has been a while since I flew on an aircraft that cannot be tracked on FlightRadar24 and this also meant that it was difficult to track the inbound and outbound link and aircraft rotation.

The PNR from the OTA was available on the Sriwijaya website (NAM Air website redirects to Sriwijaya) and the simple mobile application allowed check-in very easily. I selected a window seat just ahead of the wing to get a good view of the engine. However, the time of the day and just half a window for row 6 meant that I couldn’t get any pictures though I enjoyed the view.

Yogyakarta is served by Adisutjipto International Airport with a single runway which is 2200 mtr in length. The airport is managed by Angkasa Pura – the state run Airport Management Company of Indonesia. The airport terminal is sandwiched between the runway and a railway line. The airport is currently undergoing massive upgradation with apron expansion and terminal expansion to cater to the ever growing traffic.

The airport was destroyed in earthquake of 2006 and has been shut for operations during volcano eruption from nearby Mt. Merapati as well. Due to congestion and on-going

The airport is serviced by local bus service from the city and it is very cheap to say the least. With the air traffic growing much faster than what the airport can cope up with, a few airlines and flights have been moved to the International terminal and NAM Air is one of that. Since the time of departure saw a Silk Air flight to Singapore – the congestion was at its peak.

Since the car drop was at the domestic terminal, I had to walk for about 5 minutes to the international terminal and wait to get inside. The system is similar to that in Jakarta, with security check at entry, followed by check-in. There was a very long line for flights and thankfully a counter away from the check-in counters which had NAM air staff who was kind enough to hand over the boarding pass.

This was followed by a quick security to enter the Security Hold Area where finding a seat was next to impossible. The view of the apron was blocked by large boards mentioning the improvements which are going to come in soon. There were retail and book stalls, food options, prayer rooms and charging points.

The wait was over an hour since I had reached a little early. I expected the flight to depart early since I saw a NAM Air aircraft land around 1840 for a 1920 departure. Boarding was announced at 1850 and people queued up quickly at Gate 3. As I crossed the gate, I was overwhelmed to see the B737-500. As I have said before, in Aviation – the newest, oldest and rarest are very important. 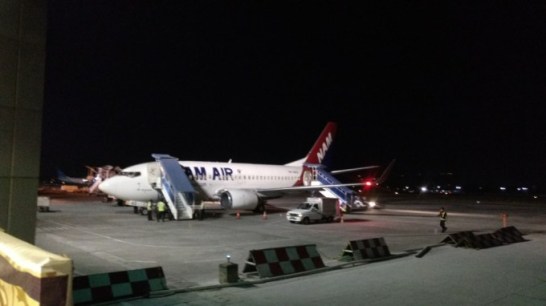 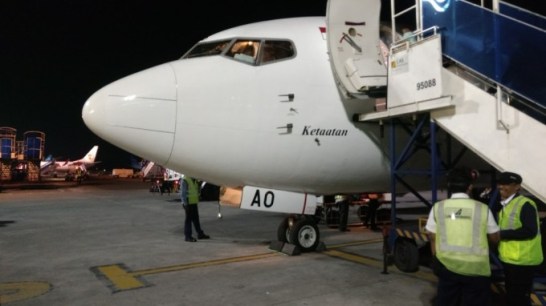 It was very hot inside the aircraft and one would not believe that the aircraft was 23-year-old. Many younger aircraft in India seem worse than the condition of this aircraft. The seats were functional, clean and apart from the yellow standard lighting of the Boeing and smaller luggage bins, things looked normal.

The tray table was clean but lose and I had to struggle to close it again, after opening for no good reason.

Boarding was over and after a cross check of passengers on board the crew proceeded with closure of doors and we pushed back 10 minutes ahead of schedule. There was a quick safety demo as we taxied out on the active runway and backtracked to runway 09 for taking off eastwards before turning towards Jakarta.

It was a very short flight and the crew sprang into service immediately. As the cart rolled out I was expecting a lot, only to be handed out two cookies and water. The in-flight magazine was nothing but a catalogue of in-flight sales.

The crew also did a quick round of in-flight sales by when we were already on our descend into Jakarta.

We landed on runway 25R and made our way to one of the gates at Terminal 2F. Short walk later I was out of the terminal in the famous Jakarta traffic jam waiting for an Uber to get back to my temporary residence.

The aircraft did not look as old as it was. It seemed well maintained, was clean and the crew was polite and efficient. The Strawberry bun on the inbound was definitely more tastier and quantity wise better than the two chocolate chip cookies.

However it was an experience I will not forget. A rare aircraft type, a rare airline which may not exist in the long run due to merger or acquisition and a rare city pair.

Aircraft: PK-NAO. First started operations with Continental in 1995. With NAM Air since 2015 and named Ketaatan. 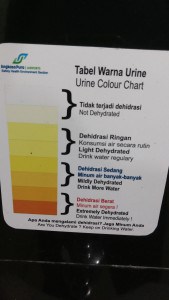