This was to be the last domestic flight I had planned before leaving Indonesia after few weeks of work. I wanted to cover all the major airlines and the only one left was Sriwijaya. Its fleet consists of B737-300 (scheduled for my ride), B737-500, B737-800 and B737-900ER, along with its subsidiary NAM Air, which operates all B737-500.

Srwijaya is the third largest airline group in the country with the top spots with Lion Air Group (Lion, Batik, Wings) & Garuda Indonesia (Garuda & Citilink). They call themselves full service but indeed the service can hardly be classified that way.

When I explored the option I booked the flight operated by B737-300 (B733). It also suited the time band I wanted. The flight originated in Jayapura and continued to Jakarta via Surabaya. 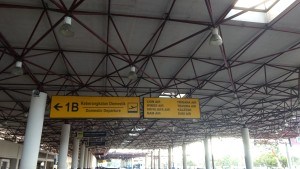 The booking was done from an OTA and the PNR was not traceable on Sriwijaya website for quite some time. The very basic, difficult to navigate website and equally basic mobile application allowed check-in 24 hours to departure. I was excited to see the seat map reflect that the aircraft indeed would be B733 – my first on the subtype.

Juanda International Airport (IATA: SUB) is one of the busiest airports in Indonesia and serves Surabaya – the second largest city in the country. The 3000mtr single runway is aligned 10/28 and has two terminals – one each on either side of the runways. 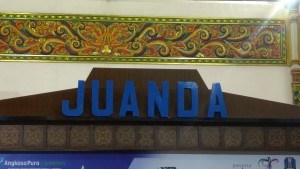 Terminal 1 is the older of the old and clearly shows its age while Terminal 2 – used by Garuda Indonesia is a modern building. There are limited public transport connections to the airport from the city and the dependence is more on popular radio and app based cabs.

I reached well in time for my flight and headed to the Sriwijaya counter. The co-operative ground staff spoke with me in Broken English and I replied in Broken Bahasa. We could not understand each other. I m sure had I spoken in Marathi or Hindi, the result would have been the same.

I had showed my passport and showed my ticket, tried telling that I have nothing to check-in and yet there was something else which was bothering the ground staff. After few minutes, the botheration stopped – they gave up! And I got my boarding pass.

I headed to the common area since security was at the gate. There are a lot of food & beverage outlets but hardly any which face the ramp and since that was a requirement for me I opted for the one which had such a seating available.

An MD-82 or Airfast was being pushed back. After spending some time in the common area it was time to cross over through the security and wait in hall 6 which was overflowing. The reason was clear as I entered it post security, Sriwijaya and NAM operate flights from here and 2 flights were delayed. The B733 came in on time and went away from the gate. A few minutes later I checked when we would board and the boarding started immediately but we were walking in the direction opposite to the B733 to enter a B738! Disappointment struck and it struck really hard. I was trying to understand why the change. A co-pax who had come from Jayapura indicated towards the engine, the crew tried telling me that this plane goes to Jakarta and another tried confirming that I am on the right plane and I should not worry. I blamed my luck, thanked myself for being able to board the B737 MAX8 earlier and sat on my seat.

We pushed back with a delay of 5 minutes and taxied to runway 10. The aircraft was not smelling fresh and the engines made some abnormal noises every time the pilots moved the throttle and braked. Soon we lined up and took off before banking left and flying over Surabaya and setting course westwards towards Jakarta. 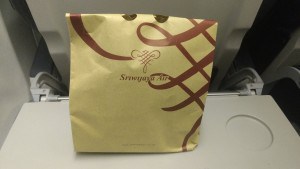 The flight was not the best ones I have had. Service started soon and there was water with a chocolate bun – which was dry and stale.

We followed the northern coast of Java island for most part and got a great view of Sokerno Hatta Airport as the landing was from western side. We landed on 07 L and again wasn’t one of the best landings. We parked at remote bay and the forgettable flight came to an end as I got into the bus.

Of the 6 airlines that I tried – 2 each from the main airline groups in the country, I absolutely liked Garuda Indonesia, Batik Air, Citilink, Lion Air and then came the last two – NAM & Sriwijaya both belonging to the same group.

The basics of clean planes, efficient service and fresh offerings for meal were missing on this Sriwijaya flight. 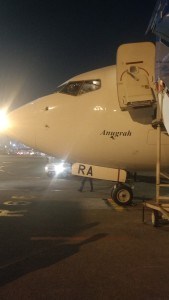