Citilink – an all Airbus A320 operator in Indonesia started off as a low cost arm of National Carrier Garuda Indonesia. Years later it was hived off as a separate entity and continues to operate close to 50 aircraft (A320ceo + A320neo) from its main bases at Jakarta and Surabaya.

This airline stood out in terms of the uniforms and branding color (fresh pigment green). They did not have the prayer pamphlets which I noticed in most other airlines in the country.

It was great to be back on this all familiar Airbus A320 with 180 seats – my favorite.

The problem of booking with Indian Credit card or international multi-currency card continued for this booking as well. This ticket I managed to get from another OTA which did accept my card for one time after telephone verification.

The PNR was trackable on the Citilink website which is a total no-frills website. Clean design with ease of navigation with every important aspect that is needed available on the home page. The aircraft has the forward rows classified as Green seats and additional charges apply to block those seats. I did not block any of those and took 9th row, the first non-chargeable one at check-in which opened 48 hours to departure.

The flight was fairly empty and I got a change to see how the seats are. Essentially the leg room is same across all seats and the airline was charging more for convenience.

The Supadio International Airport at Pontianak has seen a soft launch recently with the new terminal which is spacious, modern, roomy and clean. The airport doubles up as military training facility for the Indonesian Air Force and I saw some interesting aircraft types before boarding.

The single 2500mtr runway is without a full length parallel taxiway and it was fun to backtrack on active runway, seeing the lush greenery surrounding the airport.

I spent a good amount of time at the airport and the retail options along with food & beverage selection was far more than what was expected from a city this small and an airport this busy.

A large high ceiling hall in the newly designed and built terminal acts as check-in area for all the flights and departures are from level 1. The security area segregates the domestic passengers from the international ones and the domestic side had Departure Control System and automated boarding pass readers. 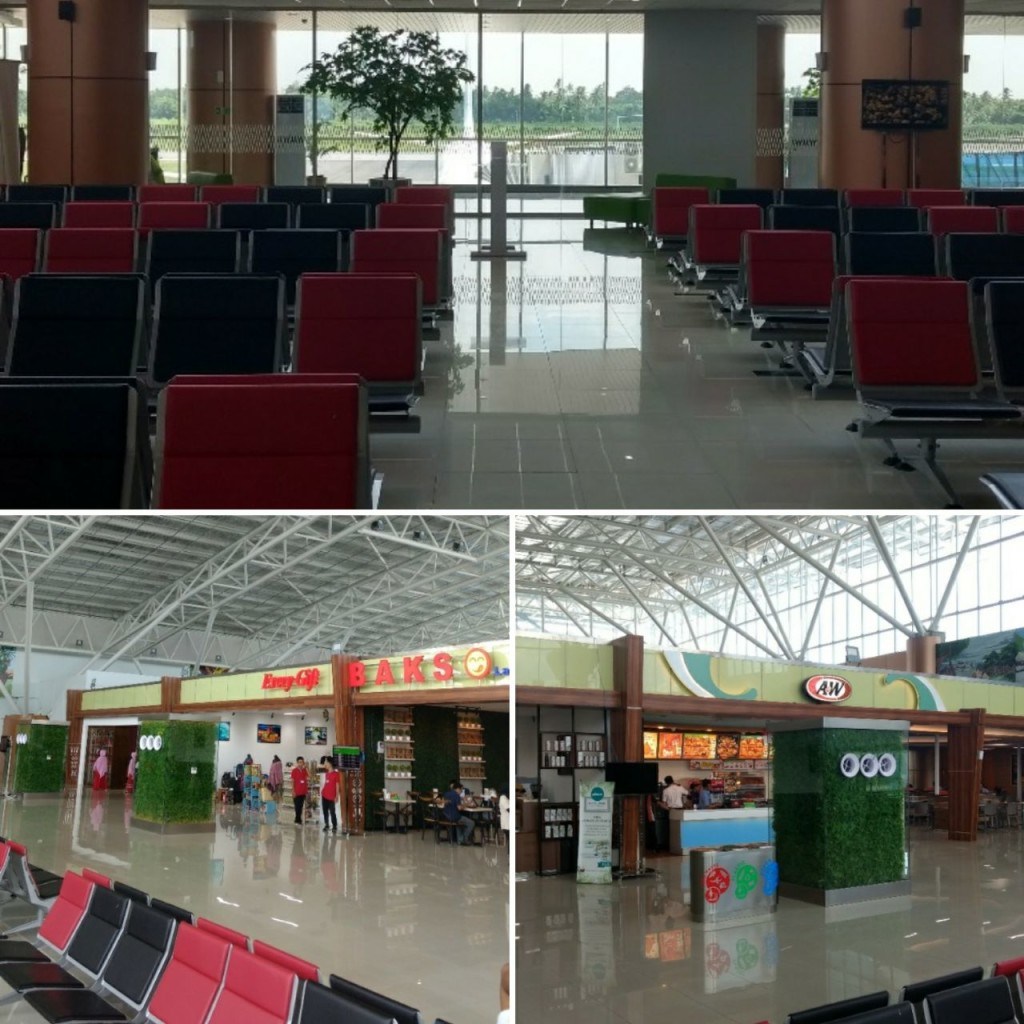 While the area outside the arrival & departure section has some Batik Stores and restaurants, the Security Hold Area has couple of coffee shops, souvenir shops and retail shops.

There is no public transport and major radio / app based cabs do not service this city. One is reliant on prepaid taxi service. All prominent airlines in Indonesia serve Pontianak and I saw some non-standard ones like Xpress Air and Kalstar operate in and out of the airport as well. 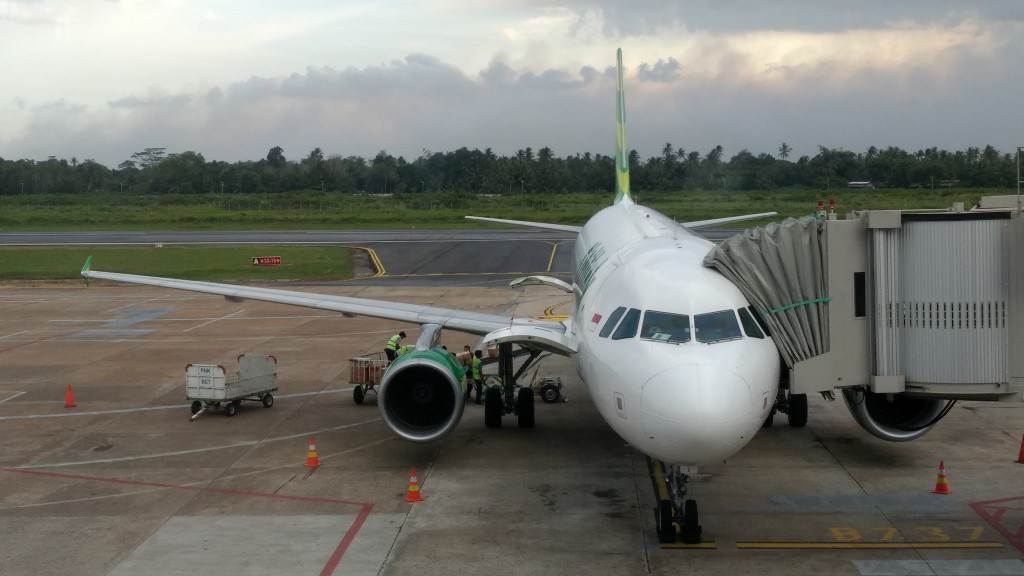 I reached very early after visiting the equator and was lucky to have a nice relaxing chair where I could sleep for a few hours before my flight. The aircraft had arrived over an hour earlier and boarding started at 1635 for a 1715 departure. This surely was going to be a before time departure. I was surprised with less than half the flight being full and boarding over in just about 10 minutes. There was a lot of cargo which went in though.

We pushed back at 1700 hours and the efficient, professional and smartly dressed crew did a quick safety demo. We taxied to end of runway 15 and took off for Surabaya – the second largest city in Indonesia.

A few minutes into the flight as we set course South East to Surabaya, the crew sprang into action, announcing the start of in-flight meals. The menu selection consisted of everything local in the meals section and then few options for bread and noodles along with tea, coffee and cold drinks.

I opted for a cup of coffee and purchased water. It’s not free, unlike India. The seat back pocket had the menu card, safety card and an inflight magazine which was entirely in Bahasa.

The light load meant I could try out the different seats and speak to the crew. It’s always best to take the crew in confidence when you want to change seats often and take photographs, especially when you cannot speak the local language and anything unusual would raise suspicion.

The flight was uneventful. We were in holding pattern over Java sea, north of Surabaya for 15 minutes before leaving the hold and landing on runway 10. The vast expanse of the city was fun to see while on finals.

We parked at remote bay and were bussed to the terminal which was less than a minute by the bus. The terminal is stuck in the past. Wonder how old it is, more in it when I cover another airline and take off from Surabaya.

That’s just the kind of service I like, predictable, no surprises. Citilink had many aircraft on the ramp at Surabaya – one of its biggest base. I would certainly recommend Citilink to anyone who is interested in flying within Indonesia. 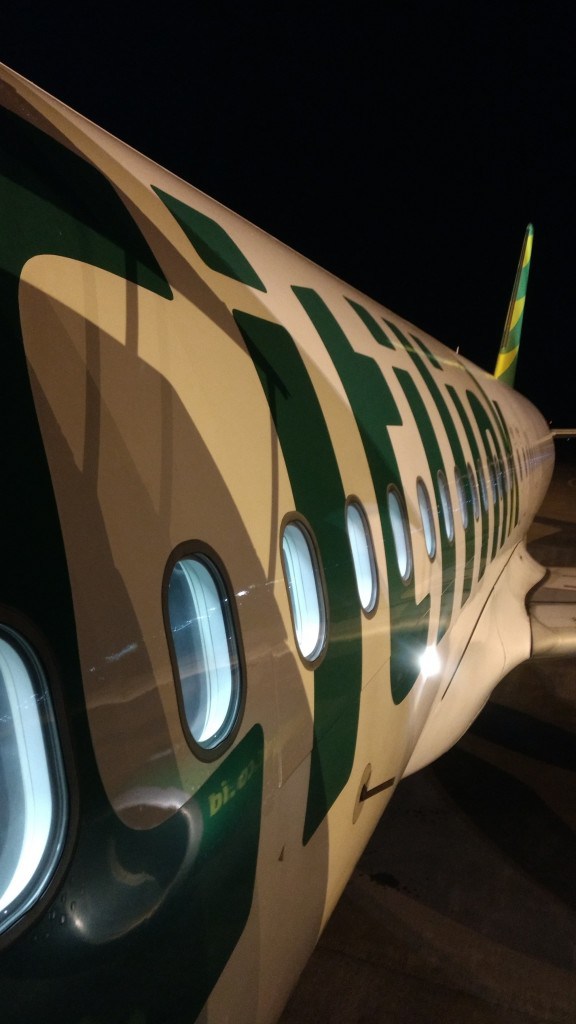