This was to be my second experience on Vistara, with the first being a complementary ticket in Premium Economy (Flying the new feeling – Vistara UK 991 from Delhi to Pune)

The last leg of my Incredible India trip was to fly from New Delhi to Pune. I was in two minds, to redeem one ticket on Jet Airways and purchase another or to purchase both on some other airline. With the previous two legs being on Jet Airways & Air India, Vistara became the carrier for this journey to experience all the Full Service Carriers in the country.

Booking was done on the airline website. The website was responsive, fast and allowed seat and meal selection.

Web check-in was done two days to departure and the same seats which were selected at the time of booking – 20A, B were reserved.

Long traffic jams in Delhi, took considerable time to reach the airport. We entered through Gate#1 to head to one of the check-in counters. As Vistara Silver, headed to the Premium Economy Check-in counter since they also accept Vistara Silver members.

Handled by the AI staff, the lady at the counter was wearing the Air India uniform with a Vistara lapel pin. As we presented our ticket and ID, I requested her to check if any upgrade is possible, since I have heard and seen Vistara Silver being upgraded one class up. She pretended to call someone and then said No for upgrade.

On inquiring if Premium Economy is full, she remarked that it is! Later we found out it wasn’t full at all. Boarding cards were handed out which had our seats changed to 11A and B, different than the ones which were blocked.

Clearly the experience could have been much better at the counter!

With almost all security bays open, Delhi was bustling at this time of the day with long queues which were moving at snail’s pace. We joined one of them. The problem was lack of operational X-ray scanners which was slowing down the whole process.

Thankfully we were on the other side in lesser time than expected. The central area used mainly by Air India on the domestic and international side wore a deserted look except for a single B787 on the international gates. The hub at Delhi seems to be working well with all the narrowbody aircraft dispatched across the country post 1300 hours.

A quick bite at the food court and we set out to reach our gate located at far end of the terminal.

The cabin crew welcomed passengers at the door and some of the Business class seats were occupied. As we settled on our seats, the first impression was that Air India having far better leg room than Vistara. A steady stream of passengers kept coming in until the crew requested ground personals to deplane and closed doors at 1700 hours. VT-TTC our aircraft for the day, commenced push back at 1702 hours.

The aircraft was clean, including the seat pockets. However, the sticker on the seat back was missing and the curtains used as separator between Premium Economy & Economy were not sliding completely. 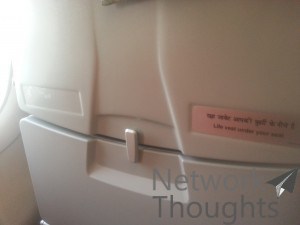 While we taxied out and waited for our turn to take off, three landings – Jet Airways B737, followed by A330, followed by Sri Lankan A321 was followed by B777 of Air India. We did a rolling take off from runway 29 in the westerly direction at 1722.

We overflew Gurgaon, amidst an envelope of haze and cruised along the usual south westerly path towards Mumbai.

Service started soon afterwards with the cold drinks tray heading to the premium economy and the meal cart being pulled for the economy class. The cabin crew politely referred to us by name before asking if we would like a Veg Meal or a Non-Veg Meal. The veg meal consisted of a Paneer wrap and Non-Veg meal was an oriental chicken option. We opted for one each of these which came in their signature boxes. I always wondered how the presentation would be and the ease of eating the boxed meal. It turned out to be good. The plastic container which has the main meal is very firm and sturdy unlike the containers made up of foil by other carriers.

The Paneer wrap could have been a lot better with the wrap not having any taste and the paneer filling being too less to create an overall taste. The oriental chicken option was tasty. Served along was a corn salad – which could have been lot better, especially the quality of the corn kernels and Chocolate Mousse which was delicious.

Tea/Coffee service followed soon after and another round of water service and cleaning of meal boxes. The service was with a smile and was efficient.

Capt. Arora was in command and he came on the PA few minutes before descent started at 1841 to inform that we would have a before time arrival into Pune. We were cruising at 34000 feet and he was assisted by First Officer Capt. Gupta in the flight deck.

We landed on runway 28 at Pune at 1906 and parked at Bay#1, which is an aerobridge bay. The crew announced the baggage belt as we made our way out to the small terminal in Pune.

Baggage arrived relatively quickly and we were out in no time.

Ground Experience – 1/5 (Seats changed, no clarity on upgrade for Frequent Flier Program Status, Ground staff did not give out the true information)

Will I choose Vistara again? Depends on the pricing