This seems to be a season for reviewing Air India flights. The national carrier which is often in news has been close to my heart. I have always felt that the airline has a lot of potential to grow and be successful as an airline on the domestic and international circuit.

This was the longest sector of our e longest flight for our journey was the sector and at the time of booking only IndiGo and Air India were flying non-stop on this sector. Spicejet has recently started operations. There are a plethora of one stop options via Hyderabad, Mumbai and Pune.

Thanks to Air India being a member of Star Alliance, I redeemed my Lufthansa miles for this sector. The process involved getting in touch with Lufthansa call Centre which was very prompt in response and booking of the ticket.

The ticket came with information that it has to be re-confirmed with Air India Call Centre 48 hours before travel, something which I found really strange .

The ticket sent by Lufthansa had an Air India PNR as well, which worked perfectly on the Air India website and allowed blocking of seat. I did call the Air India Call Centre which promptly re-confirmed the ticket and the web check-in was a hassle free experience too.

The Air India website as a whole is a dated product with schedule not updated for long and some very obvious mistakes like ATR-72 being referred to as ATR-70 on the schedule page.

Cochin/Kochi is the first private airport in India and the whole experience takes you back by a decade if not more. The chairs with cushions are one prime example.

The airport does not have inline screening and we made our way to the counter after baggage screening.

There was only one Air India flight and 4 counters were open. We proceeded for check-in where the gentlemen looked at our ticket, glanced at our ID and confirmed if it is a Lufthansa ticket. He quickly issued the boarding passes and tagged our bags, directing us to security and informing about the boarding gate which was not printed on the boarding pass. Efficient and quick.

Short lines at security which was quick even while it involved removing shoes due to heightened security measures in the country. The Security hold area is small but was sufficient for the two flights it was catering to for that time of the day.

There are two small outlets for snacks along with beverages. Newspaper trays were being filled up by the staff and there were a few magazines as well. The cost of the snacks bar is not atrocious.

While we had a cup of coffee, Air India flight AI466 arrived from Trivandrum before schedule.

While the aircraft had arrived early, boarding started around 0655. We walked to the aircraft and boarded from the forward door.

On the ramp were few aircraft of Jet Airways, Air India Express and the B747 of Air India which had landed from Jeddah.

The flight was almost full in the economy class. Doors closed at 0720 hours and pushback commenced at 0722hours.

The cabin crew announced that Capt. Khushboo Rajpal was in command and the flying time would be 2 hours and 45 minutes to Delhi.

The initial impression was very good. Great legroom, clean seats, well laid out seat belts. However, the inflight magazine was missing and there was a newspaper in the seat pocket which was not properly folded, just dumped. The color scheme of Air India seat fabric looks fabulous.

As we taxied out to the end of runway 27, an Air India double bogey A320 landed.

A very smooth take off from runway 27 was followed by banking right and setting course towards Bengaluru, which we overflew to set course towards Delhi. Beautiful views of Pykara lake near Ooty and few towns till central India after which the visibility dropped drastically.

Earplugs were not handed out on ground and neither were they handed out when the seat belt signs were switched off. The Inflight Entertainment Screens (IFE) which was working on ground conked off post take off. While the crew who was looking after this section of the aircraft promptly responded to the crew call button, the gentleman only asked us to check if pressing A/TV button helps start the screen. It did for one but did not for another. To our utter surprise, he did not even try helping but just walked away. 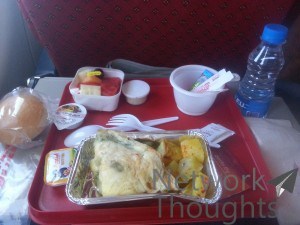 Since the audio was working well, I tapped the screen and it started working, but only the map and not the video channels. The crew did not bother to ask / confirm if the screen was working when he saw it was. Small things which could go a big way in service industry.

The meal service started soon after. I am a big fan of the omelets served in airlines. I have not been able to cook similar ones at home! I was somehow sure that Air India would offer egg preparation on this breakfast service. The same gentleman started the meal service and handed over a tray without asking for choice.

In shock, I asked if there is a non- veg option available to which we were told there is and he just forgot to ask for options. Just the foil container containing the veg option was taken away, with the chutney still in the tray and another foil container was placed which contained the omelet with potatoes. The food was tasty and sufficient for breakfast. Alongside were cut fruits and a bun.

The crew cleaned up the plates and turned up only when the cabin was to be prepared for arrival.

Had to hold near Delhi, before heading towards runway 29, but turned again and landed on runway 11. We braked very hard upon landing veering left of the centre line for exit, with another round of hard braking, before coming back to the center line and exiting from the next exit.

The cabin crew did not announce the baggage belt number. Air India ground staff was waiting at the gate for connecting passengers to its afternoon bank to EU as well as flights to Melbourne.

Baggage arrival was fairly quick on Belt#1 and New Delhi T3 as always was a world class experience.

Air India has to quickly fix their IFE and update the content or think of moving to Wi-Fi services on-board like what Vistara & Jet Airways are planning.