Domestic air traffic in India recorded a growth of 3.74% in 2019, after double digit growth for the preceding four years to close 2019 with 1441.71 lakh (144.17 million) passengers as compared to 1389.76 lakh passengers in 2018. The year was characterized by the fall of Jet Airways in April. The last year’s prediction on this site revolved entirely around the survival of Jet Airways. Market dynamics changed significantly as government tied slot distribution to net addition of capacity, putting strain on the airlines which had to shell out additional cash to induct aircraft to obtain the lucrative slots in Mumbai and Delhi. However, the benefit of these slots would be realized over a period of time!

Every month of the year except April saw an increase in passengers over the same month previous year. However, while earlier the growth was almost always in double digits, in 2019 it was restricted to single digits and sometimes just scraped through.

The year ended with Full Service Carriers (FSCs) having only 20.6% market share while 79.4% rested with Low Cost Carriers (LCCs). For the month of December, LCCs had 82% market share!

The month of December wasn’t exactly what the airlines would have hoped for. While last December the airlines recorded the best ever passenger numbers during the year, it was not the case this year. Air India, GoAir flew higher passengers in November, while all other major carriers reported the best numbers of the year in December.

While the low point of the year was fall of Jet Airways, the high point was starting of international services by Vistara. Vistara also joined GoAir in having more A320neos in fleet than A320ceos.

A comparison between 2019 and 2018 shows that Air India had a flat year in terms of market share, with every other airline gaining market share which was with Jet Airways in the prior year. In terms of passengers, both the TATA airlines flew 21 lakh passengers more each, while IndiGo flew 100 lakh more and Spicejet flew 44.3 lakh additional passengers. Go Air crossed the 10% mark in market share and Spicejet propelled from fourth to second in the market share game.

A detailed analysis including key factors which will affect the industry in 2020 will be out once additional data is declared by DGCA. 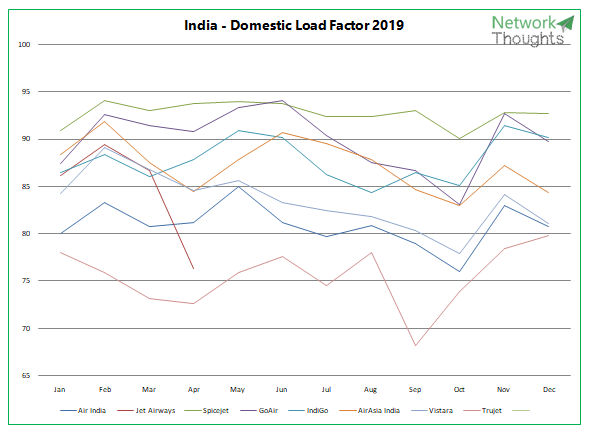 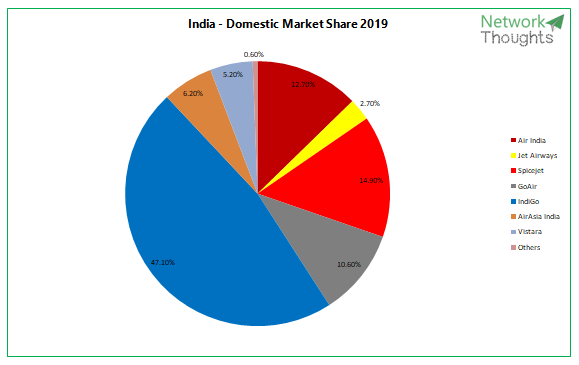 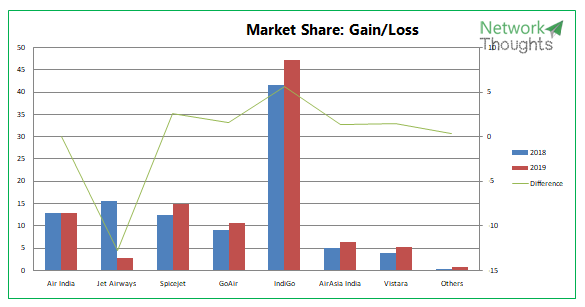