The flights would operate as below

Yesterday, when I tweeted this the discussion veered around its rivalry with AirAsia group.

From battling Air Asia in India to taking the battle to their home, IndiGo launches Kuala Lumpur from #Delhi and #Bengaluru eff mid November.
Lets see how this goes ! Will it be like DEL-SIN ?

The flights will operate from KLIA2 which is the home of Air Asia
IndiGo has selected routes where AirAsia is not daily
Air Asia X operates 4x to DEL(A330)
Air Asia operates 4x to BLR (A320) https://t.co/tnlXv1ZHQL

AirAsia India started Indian operated in June 2014 and made a buzz of being profitable in the first year of operations along with starting International flights. The airline has not yet been profitable in any quarter and the fleet stands at 19 aircraft, one short of the mandatory 20 required to be eligible for International operations. Both the airlines have been locked in a bitter battle on multiple routes in India with IndiGo mirroring the AirAsia India network often. Consumers have never had it this good on the routes where AirAsia India operates since the fares have been slashed to keep the airline away from profits.

IndiGo will operate to KLIA2 at Kuala Lumpur. KLIA2 is the home of AirAsia Malaysia and a hub for all its group airlines. Over 90% of all flights from KLIA2 are operated by the AirAsia group. Cebu Pacific, JetStar Scoot and JC Cambodia International are the only other carriers. While the taxes are lower at KLIA2, not all low cost carriers operate to KLIA2 with Lion Air choosing to operate to KLIA where its Malaysian Subsidiary Malindo has a hub.

AirIndia Express was operating flights to Kuala Lumpur from Chennai and was the only carrier from India doing so. The airline pulled out of the market in February 2017. This is one market which sees near 100% utilization of seats from Malaysian side and nil from Indian side. Under the Air Services Agreement, Malaysian side has unlimited access to 18 points in India and restricted access to the six metro cities.

In April 2017, both the sides enhanced the Air Services Agreement which gave out some additional seats to the Malaysian side and saw increase in frequency / equipment upgrade / new routes by Malaysian Airlines, Malindo Air and AirAsia group.

The Malaysia – India traffic is not as big as traffic to Singapore or Thailand from India and thus has been the stopover destination for traffic flowing to Australia and Indonesia along with holiday crowds to Indo-China region. Unless IndiGo is planning to feed traffic from Kuala Lumpur to Middle East for future European destinations, the airline will find it tough to sustain. IndiGo has smartly selected those routes where AirAsia is relatively week on the frequency front with bilaterals restricting the airline to 4x frequencies each. However, Delhi is serviced by Malindo Air and Malaysian Airlines with multiple frequencies and Bengaluru sees flights of Malaysian Airlines on a daily basis and Malindo on 2 days of the week.

Time will tell if IndiGo can add more flights to Kuala Lumpur from places like Chennai, Tiruchirappalli or Kochi or will it keep it restricted to the metro routes. The airline has already burnt its fingers once with flights to Singapore from Delhi and Mumbai being pulled out.  For Kuala Lumpur, the airline was back with its cheeky branding as always. 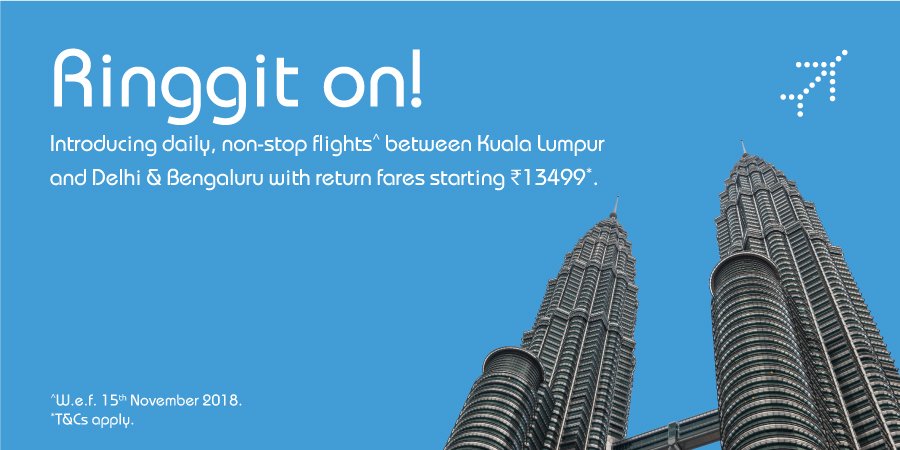 Unlike what many have predicted that this move is to counter AirAsia India, it looks unlikely to be that way since other airlines in India are not likely to consume the seats allotted and thus keep space for AirAsia India to add flights when the airline is eligible to fly abroad. The motive seems different and we should know about this by the time the year ends. Keep watching this space!