On Saturday, 25th of August, I woke up to a message informing about an event in Delhi by Vistara for the unveiling of VT-ATV, the 22nd aircraft of the airline and the one in retro livery. Things moved very fast since then with the airline arranging for the travel along with the media agency getting in touch for the temporary Airport Entry Pass (AEP). There were periodic updates from the media agency along with a formal invite from Team Vistara. My twitter account saw a lot of love being showered from Twitterati as I tweeted the aircraft pictures on Saturday and this article will have some more pictures.

I landed in Delhi on 1st of September and walked to the DIAL-AEP section for the pass. The area soon turned to a gathering of aviation geeks with many meeting for the first time or re-connecting after a while. As the invitees and media took their pass, we headed to gate#10 to clear security and board the waiting bus to take us to the Air India hanger located next to the cargo terminal at New Delhi Airport. The long bus ride was a treat for one and all but a grim reminder of the airline business, since the bus passed through some Kingfisher Airlines ATR aircraft lying around and then some planes belonging to NEPC and Air Sahara. The bus stopped and we got down to a red-carpet welcome to the hanger.

Mr. Sanjiv Kapoor, the Chief Strategy & Commercial Officer of the airline was in attendance to meet the press and other invitees comprising bloggers, photographers and special invitees. After quick introductions and handshakes and a few words with the Chief Executive Officer of the airline Mr. Leslie Thng, it was time to take seats and begin the proceedings for unveiling of the retro livery aircraft. 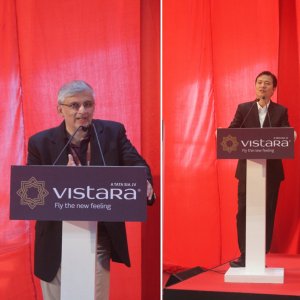 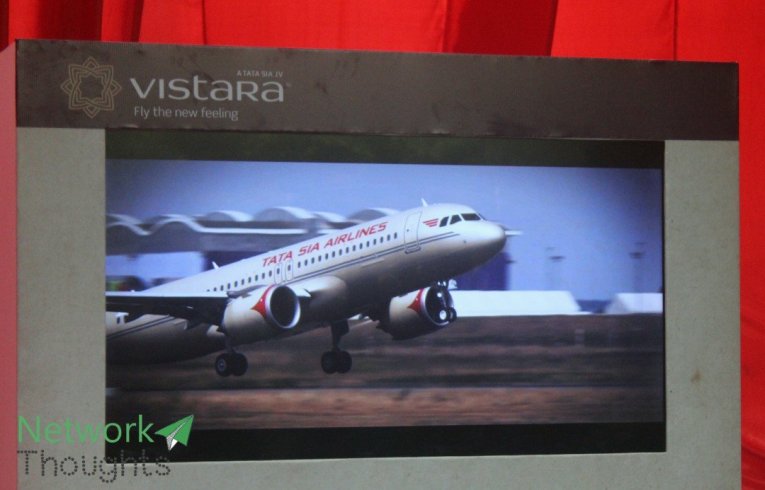 Mr. Thng gave a brief about the event along with a video of the making of VT-ATV. This was followed by Mr. Kapoor giving details the paint scheme and the challenges. Since the only photo available for VT-ATV of TATA Airlines was black and white, it required a lot of imagination to come up with this livery. Mica paint has been used for this livery which creates a metallic shimmer and changes hue depending on ambient lighting. The color appears different based on the lighting around and swings between Silver and Gold.

It was time to unveil the aircraft as the red curtains made way for the first glimpse of the 22nd A320 of the airline. The first detail I noticed was that the step ladders branding of AI-SATS was plastered with a Vistara sticker! The CXOs of the airline made a reference to the photographs of the aircraft leaking online but another secret having remained a secret. This was the retro uniforms of the crew. The crew would be in retro uniforms – which looked classy and better than the current uniform of Vistara in my opinion. The aircraft weights 25 kgs more than other similar aircraft in the fleet because of the paint and the airline would use this livery for just one year.

The livery recreates the one used in the 1940s by Tata Air Lines, India’s very first airline that was founded by JRD Tata, and the aircraft also bears the registration VT-ATV that was originally used by a Tata Air Lines DC-3 aircraft. This striking retro-livery is also a celebration of 150 years of the Tata group, and it reclaims for Vistara the space once held by the pioneers of aviation in India, Tata Sons, and the Father of Indian Aviation, Shri JRD Tata. The inaugural flight will also feature a menu with JRD Tata’s favourite dishes, as remembered by senior chefs at Taj Hotels. It includes Cheddar Cheese and Onion Omelette, Crêpe au Champignon, Meat Medley, Waldorf Salad, Minestrone Soup, Herb Roast Chicken, Goan Prawn Curry and Crème Caramel.

The special livery has been adapted from the original with the help of Airbus, which produced CGI renderings to fine-tune the aircraft’s look. In the absence of a colour photograph of Tata Airlines’ original VT-ATV aircraft, Vistara took some artistic liberty to paint its new aircraft in a shimmery Silver-Gold using mica paint, giving it a shade of Sepia under certain light conditions for the retro look. The colour Red was chosen for the name and colour accents, and Grey for the cheatlines.

The special cabin crew uniform has been designed with inspiration drawn from the uniforms worn in the glamour days of flying, while keeping practicality and industry regulations in mind. The vintage-style uniform is a tailored blouson and semi-shaped skirt in moss crepe (fabric) that come in soft hues of Pale Lilac and Pastel Pink from the family of Vistara brand colours. It includes a beret, white pumps, and a pillbox-shaped vanity bag. Just as with Vistara’s regular cabin crew uniform, this special uniform is designed to project all qualities that the airline’s cabin crew embody – a sense of style, elegance, warmth, care, friendliness and professionalism.

Invitees were given a tour of the aircraft which features the same product as the airlines other A320neo aircraft but comes with a slim lav which helps the airline add one extra row. The addition will be at the rear of the plane with limited rows seeing a decrease in seat-pitch and are likely to be offered with the Freedom Fares where it helps the crew offer Buy on Board service.

The ceremony ended with the Vistara team handing over a model of VT-ATV to their guests for the day and a meal box. The busses took us back to Gate#10 even as the Vistara team continued at the hanger and later in the open as the aircraft was pushed out of the hanger for some more photographs!

The first flight of the aircraft is scheduled on 5th of September between Delhi and Mumbai and there will be a few special flights which will be planned over the next year. During these special flights, the crew would be wearing the retro uniform and some of the favorite dishes of JRD TATA would be part of the menu. The special livery is around for a year, after which the airline plans to change it to standard livery. So the clock is ticking already, if you plan to get on-board VT-ATV! 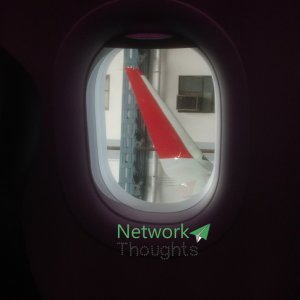 3 thoughts on “Vistara’s RETROJet – A tribute to JRD TATA”