The Minister of Civil Aviation, Sh. Ashok Gajapathi Raju launched the AirSewa portal and mobile application in New Delhi on 25th November 2016. The application is available on both Android & iOS. The Minister of State for Civil Aviation, Sh. Jayant Sinha has been active on Twitter helping passengers with their complaints and directing twitter handles of airlines, urging them to solve the complaints at the earliest. For a very long time, his directions to airlines and replies to suggestions from traveling public were hash tagged #AirSewa.

The press release by Press Information Bureau talks about Shri Jayant Sinha, Minister of State for Civil Aviation participating in a panel discussion. He said that flight delays, problem in refunds, long queues and lack of proper facilities at airports and complaints of lost baggage are the most common problems that air travelers are facing today. He stressed upon the need to respond to these problems in a systematic rather than an adhoc manner. He said that AirSewa was an attempt to provide such a systematic approach to redressing passenger grievances. Shri Sinha said that although it was a major challenge to get the various players who are a part of the civil aviation ecosystem on to a common platform, this has been achieved through AirSewa .

The portal allows the users to register there complaints against a plethora of grievances, with the best part being facility to upload voice or video. Each complaint will have a unique reference number, against which the status of the complaint or suggestion will be tracked.

The press release mentions that Nodal officers have been selected for all stakeholder agencies who will address the grievance in a time bound manner. Each grievance shared will be directed to the responsible nodal agency for resolution based on the grievance category chosen by the complainant. The dashboard shall be divided into three categories consisting of grievances pending within time line, grievances pending beyond time line and closed grievances. Each grievance shall have a resolution time line defined for initial response as well as final resolution.

I downloaded the mobile application to explore. While the efforts and idea is to be lauded, a lot of work yet remains to be done on this. I hope my constructive feedback will be considered for an update to a newer and corrected version at the earliest.

I started by checking the “Flight Status” option. There were a lot of misses in this section. While DGCA considers a flight as “on-time” if it departs within 15 minutes of its standard time of departure, the application flags this flight as RED (Delayed) even for a 3 minute delay.

The application also reflects flights operating with “S2” code as Air Sahara and not Jetlite which is its name as per Air Operating Permit. “I5” the code of AirAsia India is reflecting as Indonesia Sky on the application while “9I” the code for Air India Regional / Alliance Air has no Airline name associated with it. 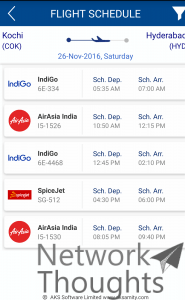 The other section I explored was the facilities. It is a great attempt to list out facilities at all airports but it could either be more interactive or have actual pictures rather than having a standard set of pictures used repetitively across airports. The section also has spelling mistakes, one of the common ones being Huice instead of what looks like Juice. It also lists out the name of parties which have contract for running the stores, more often than not these stores are branded differently and would help if the store branding name reflects. While the private airports have a lot of options for food, the ones run by Airports Authority of India do not always have a lot of options and it would help if the store brand name is displayed, preferably with pictures.

The Airport information list could also be sorted by some logic, either alphabetical or by most traveled. Currently, the app auto selects Delhi and non operational airports like Kota, Kandla and Keshod appear before operational ones like Allahabad and Agatti. While most have airport codes associated with it, after a while the list shows three digit numbering like 203 for Gorakhpur instead of GOP.

While these above teething issues need to be resolved soon, the efforts by the ministry have to be lauded because AirSewa will now become a single point of reference for passengers to raise complaints related to airlines, airports and all allied services.  We genuinely encourage all readers to visit airsewa.gov.in or download AirSewa app and make maximum usage of information available along with using AirSewa to register complaints. Afterall constructive feedback and complaints will help early resolution and improvement of services across all customer touchpoints in Indian Aviation.