A regional jet (RJ) is short to medium range jet liner which has the ability to carry anywhere between 50 to 140 passengers. The earliest regional jets were the soviet Yak-40s and Fokker F-28, which could not compete with the advanced turbo props of that era.

The earliest regional jet which was built with a specific purpose in mind was the BAe 146 – which is still serving with few airlines. However its four engine design led to higher costs as compared to twin engine variants. The twin engine space was filled by the Fokker 70 and the more popular and market leader of times – Canadair Regional Jet or the CRJ.

CRJ was the first regional jet which had the range sufficient for covering most of the routes operated by the B737s or the A320s. The initial concept evolved around having point to point flights by-passing the hubs – which means having direct flights on medium haul thin traffic routes. However since late 1980s the regional jets have been used for all types of missions – thin routes which are medium to long haul or even mid day frequencies on some hub to hub routes which see lower demand in off peak hours or as a feeder network to hubs. These types of missions are fulfilled by Airbus A320 family as well as the B737 series but the regional jets do this at a lower trip cost.

The idea of regional jet was taken up briefly by Airbus when it developed the smallest member of its A320 family, the A318 – only 80 built and 50 in operation right now. Boeing also flirted with this idea after acquiring McDonnell Douglas and rebranding the MD-95 as the B717, a 130 seater regional jet of which 156 were built.

The two major aircraft manufacturers declare a 20 year forecast at a global and regional level every year. Airbus calls it the Global Market Forecast (GMF) while Boeing calls it the Current Market Outlook (CMO).

Over the years the two manufacturers have been reducing the projected number of regional jets in the country. Both the forecasts tend to push their product range better and while Airbus shows higher demand for very large aircraft (A380), Boeing shows higher demand for a longer range medium capacity twin aisle aircraft (B777/B787). Not a mere co-incidence that the prime focus of Airbus has been A380 in the last few years and Boeing the B777x and B787. Over the last few years, both have stopped predicting the requirement of regional jets, probably coinciding with their near withdrawal from this market.

Older estimates show that world over there are around 3000 regional jets and the leading manufacturers expect the number to come down over a 20 year period. However, the numbers will go up in Asia Pacific and Latin America and go down in Europe & Asia. Overall the 90 – 170 seat segment will be 60% of world airline fleet and 14% will be the small aircraft market which will include the turbo props as well as smaller RJs.

Over the years Full Service Carriers and Low Cost Carriers started playing the game of lower cost, which started because of lower revenues due to increased competition. To help achieve lower costs, more seats were packed in the aircraft. While statistically the costs (CASK) were lowered since for the same aircraft there was an increase in available seats, the airlines did not evaluate if those additional seats could be sold. This additional inventory had to be sold at lower yields since flying empty seats is not a good proposition for the airline (Lower RASK). 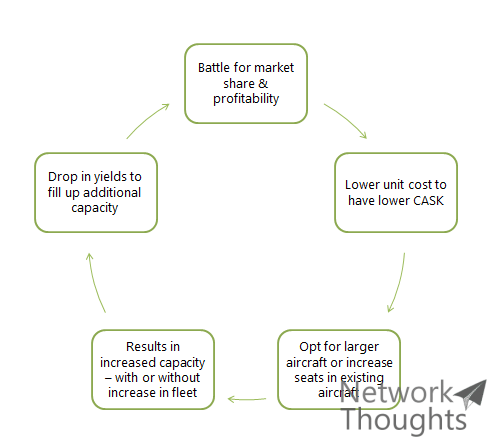 Regional jets fit in the exactly same argument which Boeing did with its B787 but at a short and medium haul. While Boeing argued that it is time the airlines bypass hub and launch direct point to point services with B787 which has lower capacity and equivalent or longer range to meet new markets which currently exist and are served via hubs. Think of the same statement in an Indian scenario – it is time to bypass hubs like Mumbai or Delhi to launch direct point to point services (Eg: Bengaluru – Srinagar) where the demand is lower and hence would require lower capacity but equivalent range.

Below chart has been made by collating multiple resources and considering the E-190 of Embraer as the base version to map other aircraft. A320NEO, A319NEO, B737MAX and the E-2 family of Embraer or Bombardier C series have not been considered since they are not currently operational.