Last week, in a surprise announcement, Virgin Atlantic announced the launch of second daily flight to New Delhi from London Heathrow. The airline opened reservations for its second flight over the weekend and made amends to timings of two other flights to India. The airline will operate the new flight with the A330-300 aircraft.

The London – India market has been one of the most lucrative for Indian carriers due to steady flow of traffic and good yields over the years. Every airline which has had the opportunity to serve international services from India has aimed for London. Air Sahara operated the route and so did Kingfisher Airlines and Jet Airways. Jet Airways had maximum seats between Mumbai / New Delhi and London at some point of time!

With the suspension of Jet Airways in April this year, the market was jolted. British Airways filled in with additional flights, but the market took a while to get back to days of Jet Airways. 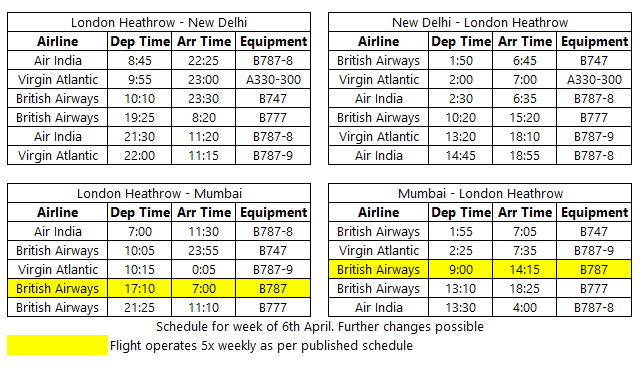 The India – UK air services agreement restricts flights to London Heathrow from/to Mumbai and New Delhi to 56 frequencies per week. While the British have almost exhausted it, Indian side has 35 weekly frequencies un-utilized, primarily due to 28 weekly frequencies being freed up after the fall of Jet Airways.

Virgin Atlantic has had mixed bag results at Mumbai, returned to the financial capital of India for the third-time this winter. The airline has had unhindered stint at New Delhi though and the expansion comes as a commitment to a route where it can help take on British Airways.

Virgin Atlantic – now owned by Delta, Air France – KLM joint venture, will look to tap trans-Atlantic traffic to North America in addition to the traffic to London Area. However, the airline lacks the domestic links from London Heathrow which British Airways has.

While Virgin Atlantic has kept it restricted to only two destinations in India, British Airways operates to Bengaluru, Chennai and Hyderabad.

As it stands today, Air India is the only Indian carrier which operates to United Kingdom. The airline has flights to London Heathrow, London Stansted and Birmingham. New Delhi, Mumbai, Amritsar, Ahmedabad and Bengaluru are connected to the United Kingdom by Air India.

From being an open secret to admitting that they have ambitions, Indian Low Cost Carriers (LCCs) have come a long way. Last year, both IndiGo and Spicejet filed for slots at various airports in the UK. This year, the two airlines along with Vistara, filed slots at London Heathrow.

London Heathrow is an expensive airport to operate, with unparalleled slot constraints and LCCs operating to London area have opted for other airports in the region. Yet when it comes to London, for Indian’s it has always been Heathrow! With IndiGo and Spicejet warming up to codeshares, will it be possible for these to sign up agreements with some other airline to carry the traffic to North America? Will the two airlines opt for a widebody aircraft to operate to London? Time will tell.

The TATA-SIA joint venture is now flying international and its B787-9s on order will be delivered soon. There are few markets as good as London for an airline to deploy widebody from India. With Hong Kong facing a downturn due to protests, the airline will have to look at London, Singapore, Japan and North America as its destinations and everybody else, like always, is beefing up their presence before a new entrant joins in.

The market has got interesting. However, not all have survived this market. Virgin Atlantic, Kingfisher Airlines, Jet Airways have fallen to cut throat competition. What cannot be ignored is the fact that Emirates operates over 10 flights a day to London Area airports from its Dubai hub which gets the necessary feed from New Delhi, Mumbai, Bengaluru and a host of other Indian cities. Likewise, other middle eastern carriers which good presence in India also vie for passengers on the India – UK route, making the going tough if not difficult.

It is good to see the British carriers exhaust the quota (almost) and will be interesting to see how the Indian market shapes up in the next one year. For a route as lucrative as London, it is surprising that India has as many frequencies un-utilized!