Last week,  Routes Online  announced the top 100 busiest routes in the world in 2017. The methodology involved using OAG Schedules to find top 500 routes by overall seat capacity and then ranked in passenger traffic with help of Sabre Market Intelligence.

The 449 kilometer route between Cebu and Seoul Gimpo in South Korea tops the list. This route saw 13460306 passengers and recorded 65967 flights in 2017. This route has seen a growth of 9.4% in passenger traffic over 2016. The routes have been dominated by domestic destinations and most of the routes are part of Asia. There are two routes each in Africa and South America while Central America and North America saw six and twelve routes respectively. Australasia saw 8 routes with the bulk of them – 68 coming in from Asia.

Nine domestic Indian routes feature in the list and Mumbai – Delhi features at fifth position. The route had 47017 flights in 2017 and saw a passenger traffic of 7129943, a growth of 4.4%. Both these airports are heavily slot constrained and have seen very little addition in flights over the last year and half. Mumbai – Dubai is the only international route from India which features in this list. A large percent of these routes are domestic routes in respective countries. 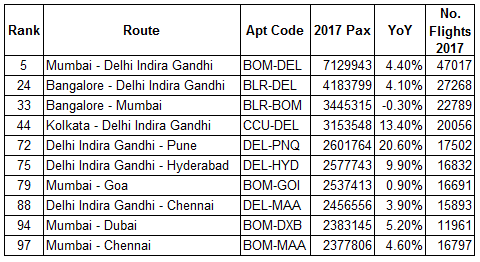 The shortest route is Bogota – Medellin which is a distance of 239kms. This route is ranked 37th in the list and has seen a growth of 10.2%. The longest is New York JFK to London Heathrow which is ranked 49th and is a distance of 5562 kms. The statistics is released at airport level and thus cities which have multiple airports like both London and New York and have far higher traffic from city to city level does not feature high on the list.

The most interesting feature I noticed was the Average base fare which the report released at route level. While the data on fares may not be conclusive due to the different channels for sale and lack of standardization on data reporting across the world, it is fairly indicative of how competitive Indian airline market is and the cost pressures. Mumbai – Delhi which ranks 5th in the list has an average base fare of $81.53, it is about $100 less than Beijing – Shanghai Hongqiao which is 6th in the list and has average base fare of $183.19 for covering similar distance.

I looked at Average base fare per kilometer and realized that seven of bottom ten are Indian routes. Considering that there are only nine Indian domestic routes, the remaining two are Bengaluru – Mumbai and Mumbai – Goa.

Interestingly, there are 26 routes in top 100 which saw reduction in traffic and this includes Bengaluru – Mumbai route. Bangkok Suvarnabhumi to Chiang Mai has seen maximum growth YoY at 36%, while Cuzco to Lima Jorge Chavez shrunk the most at 13.1%. Delhi – Pune saw a growth of 20.6% and was the fastest growing route amongst the Indian routes which made it to the list.