The Directorate General of Civil Aviation (DGCA) in India, in a surprise move has declared city pair wise traffic for the month of August 2015. The data is a dream comes true moment for analysts and probably unwanted attention for the airlines. The data lists out 302 unique pairs where airlines in India operate flights and lists out the segment wise data for each sector. This data will help the newer airlines understand the market dynamics better and the existing airlines which have monopoly or duopoly routes could find some competition for them in near future.

While a lot of analysis can be done about this data, some snippets for August as below:

Top 10 Sectors in India by passengers flown in August’15 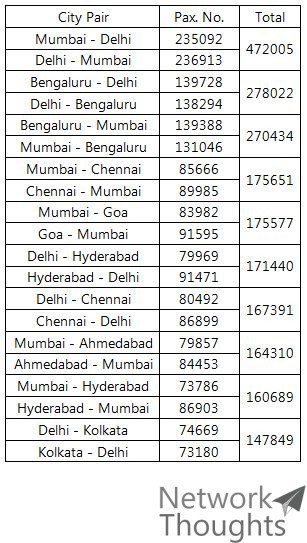 Which airlines operate on the top 15 routes in India?

Top 10 routes from each metro

We also know why Delhi has gained so much in the last few years,

As this data came out I was curious about some specific sectors for varied reasons and those have been listed below.

This data over a period of time will be a boon for the airline to understand seasonality better and plan accordingly.