Continued from Part – I

I had umpteen questions like many others. With knowledge of aviation and food, I had a good time understanding and knowing a mix of both. So from asking how meals are served on their short sectors like Delhi – Lucknow to shortest sectors like Guwahati – Bagdogra, planning of meals to avoid wastage  – a lot was covered.

I wanted to know how the airline is managing buffer meals with so many choices and in a country like India where people shift between being Vegetarian and Non Vegetarian based on day of the week. The airline is fairly new to have a historical analysis and it is not affordable to have a stock out situation of meals in premium cabins, while at the same time it is expensive to uplift extra meals beyond a certain number.

Mr.Toh answered the question by informing that the airline has same meals for the crew and that acts like a buffer for the additional meals in which they avoid wastage. Some amount of expertise which TajSATS has from historical data is also utilized for this analysis.

My last question was from a competition perspective. The industry has seen Jet Airways match Kingfisher on the In-flight entertainment front pretty quickly. It is easier to match what the competition is doing in these days and times. While cost is one barrier for entry, what are the others which could stop the competition from adapting a similar menu.

Mr. Pathak answered this question by saying that the competition is uplifting meals from multiple caterers not just across multiple cities but at times from the same city as well. This will take a very long time to streamline and may not be the focus right now for others.

The informative session was followed by photography and tasting of the menu which is served by Vistara on board. This included Cheese & Thyme Omelet with Barbecued sausage and parsley potato, Oatmeal Upma with Paneer (cottage cheese) and Sambar, Paneer Corn Masala with Hara Bhara roll & Dal Paratha.

The menu cycles are interesting with menu ranging from Murgh Kathi Roll and Idli Manchurian to Tandoori Paneer Roll and Manglorean Chicken. As the cycles work, its never going to be an option of Chicken Kathi Roll or Veg Kathi Roll but two really distinct options on offer in Veg & Non veg. The Lunch menu had Achari Muttor Pulao, Tofu in Hot Chilli Sause, Burnt Garlic Rice,Buttered Spaghetti with herbs, Chunkey Ratatouille and Mutton Bhuna Masala. 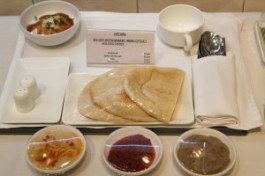 The business class menu is even more  interesting with Cheesy Potatoes, Roasted Vegetables, Grilled Chicken Sausages being some additional options to the ones mentioned above. The most interesting meal of all was the Mediterranean meal consisting of Hummus, Baba ghanoush, Pita and Harisa Dip. The option looked very appetizing when laid out on the table.

The airline is probably the only one which serves a Prawn and Leek pie, Cherry Salsa, and sauted beans as a sea food meal on board for domestic service.

Salad: Bocconcini and Black Olive Salad – which had very juicy olives and a great tangy taste.

The main course was an option of Chicken Teriyaki, Mutter Pulao, Awadhi Paneer and Amchoori Bhendi and the same option in Mutton or Cajun Spiced Cheese and Zucchini steak – which I opted form.

It was excellently plated as it came out of the kitchen. The Zucchini steak was perfectly cooked with plentiful pistachios blended with it, served along with buttered broccoli and topped with Spanish Cherry Tomato Salsa. This was served with saffron flavored rice. The Spanish Cherry Tomato Salsa was rightly served – with few bits of rice and few on the steak, giving a good taste of a combination as well as individual item on the place. Freshly baked breads and butter completed the meal. 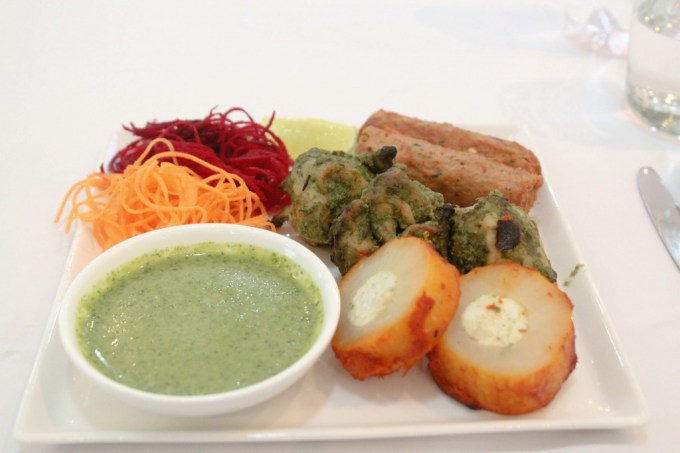 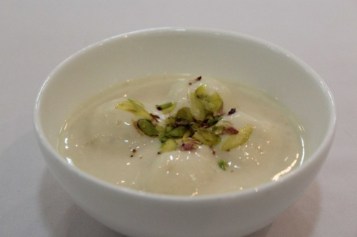 The proof of good food satisfying hungry tummies was that the chatter inside the room suddenly dropped the moment food was served and was replaced by an occasional sound of cutlery. The meal was followed by Desserts – a choice of Malai Kulfi or Ras Malai – which I chose. It was delicious. Creamy, soft and perfect sweetness – not too little, not too much. That’s probably the test of a good taste of Ras Malai.

While I have been to food meets and Chef’s table before and get invited for menu tasting these days, the experience with TajSATS and Vistara was unique and that is so because while one can visit the restaurant on any other day, the same is not true for TajSATS.

TajSATS and Vistara indeed went a long way in inviting select people to explain the philosophy behind their meal selection and also food tasting. The interaction with Giam Ming Toh and Chef Arun Batra was invaluable and the experience will be unmatched.

I was invited for Chef’s Table by Vistara PR team and I did not pay for the Chef’s table. The review is based on my experience alone.