I have a bucket list of airlines I should fly on and on that list there has been Vietjet for a very long time. The moment a plan was in place to travel to Vietnam, a flight on Vietjet was a foregone conclusion.

Vietjet is a fledging airline in Vietnam and has 40%+ market share in the country and has a fleet of 45+ A320 & A321 with a few hundred Airbus and Boeing narrow body on order.

Vietjet has a very user friendly website, which also shows fares in INR and allows booking with an Indian credit card. The website also prompts the user for purchasing baggage and meals and we did purchase both.

The airline also allows seat selection at the time of check-in and the seat prices vary as per the zone where you are booked.

Overall a hassle free experience and full marks for the airline here.

The Tan Son Nhat airport at Ho Chi Minh City is the busiest airport in Vietnam and located just few kilometers from the city centre. The airport has parallel runways, an international terminal built a decade ago and an old congested domestic terminal – which we used on our way to Hanoi.

I had checked-in from the phone but did not have access to take a printout. The domestic wing of the airport is congested with three check-in islands dedicated for Vietjet. There was one counter for web/mobile check-in where we headed and showed the mobile boarding card. With just two passengers ahead of us, the process was fast.

We joined a long queue for security. Though long, it was fast moving and orderly. One had to show the ticket along with an ID proof – which in our case was passport. The gates are located on two floors. The ground floor which had 5 bus boarding gates and many more contact gates on the first floor.

Our flight was supposed to board from the first floor – which was disappointing since I wanted to see the aircraft in all its glory for an airline like Vietjet and possibly click some pictures.

The first floor was full of retail options – food / clothes / jewelry / alcohol. Airlines in Vietnam were forward thinking, I feel. The major ones have a sizable number of A321 in fleet which help tide over the infrastructure crisis and shortage of slots.

The Vietnam Airlines A321 docked at the gate was delayed and that meant I was overjoyed to see a gate change with boarding from the ground floor. Hordes of people started rushing and forming unorderly lines. The Indian phenomenon of unorderly boarding is actually mostly an Asian phenomenon. 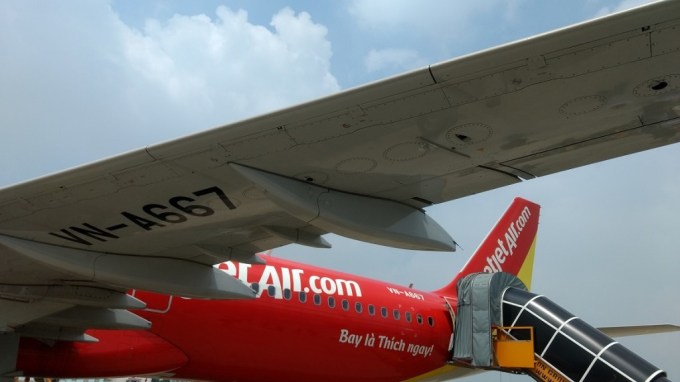 We were one of the last to board at 1105, which was the scheduled departure time. Doors closed almost immediately as we settled in our seat and we pushed back at 1110, waiting for the queue ahead of us to clear before taking off from runway two-five right at 1122 hours.

About 25 minutes into the flight service started with pre-booked meals being handed out to passengers. We had ordered for a spaghetti bolognaise which was served hot and was served with a bottle of water. It was delicious.

There was a buy-on-board service which followed and then a round of cleaning. A few minutes later, the retail cart rolled out and we purchased a handy Vietjet branded pouch to keep passport and cards along with a key chain.

While the airline became famous for its Bikini dance in flight, nothing on those lines was happening today even as smartly clad crew members criss crossed the aisles to complete the service and retail run. 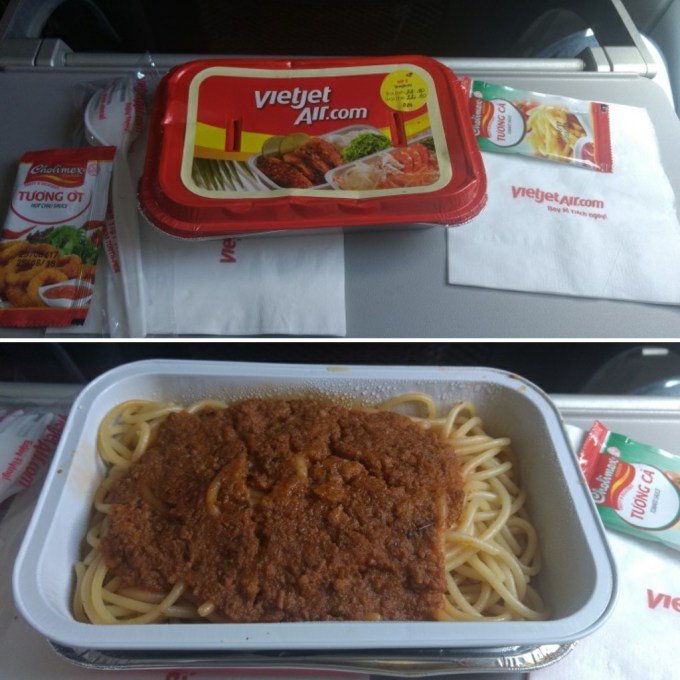 There wasn’t much to see outside the in-flight magazine reading material limited to menu cards and safety card.

The pilot announced the start of descend to Hanoi and an on-time arrival along with the weather. The crew made a quick round of cleaning run along with a safety check.

We landed on runway 11R and taxied to our designated bay. Suddenly I noticed the wooden chocks being pulled by the staff towards our aircraft!

The aerobridge got us to the newly constructed part of the terminal and it looked like it had opened the very same day, though it had not.

We walked towards the baggage belts and it did not take long for the baggage to make its way on the belt. The Vietnamese airport have a system of checking the baggage tag and matching with the one on baggage before letting the passengers out, something should be looked at for implementation in India.

There neither was a decent restaurant nor an outlet at arrivals section and all the major taxi brands were missing from the line. Uber came to the rescue as we made our way to the city. As we made a quick dash to Da nang later the same week, we visited this airport again before departing out of Vietnam and got an experience of all the terminals

The timings did not suit for another Vietjet flight and we relied on Jetstar Pacific for a trip to Danang.

Definitely would recommend Vietjet to anybody who has plans of travelling to / inside Vietnam,

Hopefully they would soon launch their much awaited service to India. 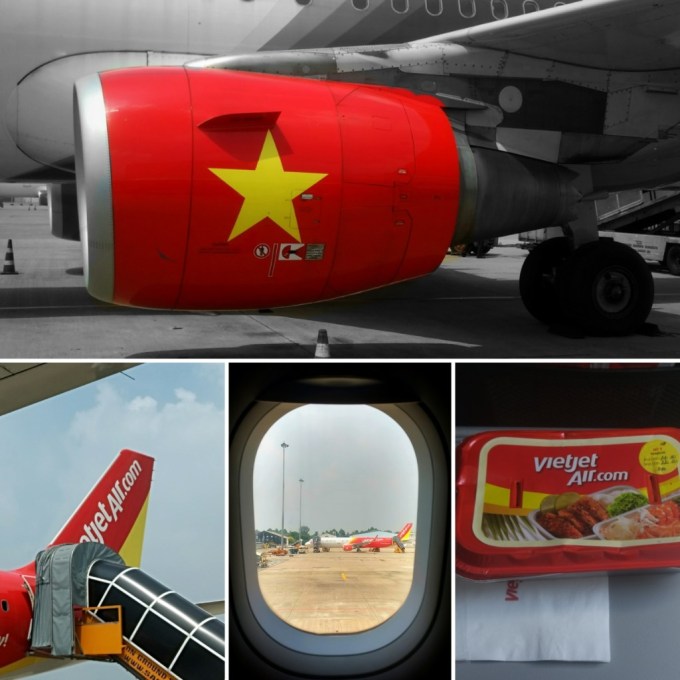